So, let me explain this comic. Today I started my class in creating graphic novels (comic books, essentially). I was running on fumes, and felt like I could barely speak when introducing myself to the class. But then, the teacher gave us a challenge: spend one hour creating a one-page comic with the topic of “time.” My mind blanked at first, but after five minutes or so I was sketching out the comic you see above, which surprised me, since I generally struggle to come up with ideas. But, given a tight deadline, I’m able to whip something out. I’ve made note of this in the past, but I rarely have enough discipline to force deadlines upon myself. Gotta work on that.

Given that this cartoon is essentially a first-draft, there are a few things I didn’t make totally clear, so I’ll lay out the basic premise. The guy in panel 2 is watching a YouTube video–one of those “watch people age” videos. But instead of being a time-lapse, the video is literally 15 years long. The video’s subject ages to 35, and the viewer into old age. The viewer is jolted into realizing that he’s wasted his life in front of the computer. 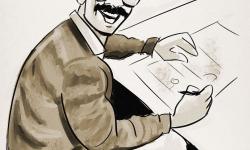 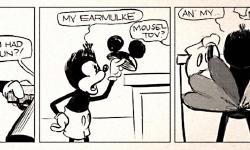 Mice of a Feather

Here’s Looking at Who, Kid? 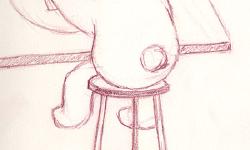 4 Pictures a Day is Kid Stuff